The store will not work correctly in the case when cookies are disabled.

We launched in the USA with an official shipping channel locally in the USA. Products for American and Canadian customers can be purchased from www.frankandbeans.com or via our Amazon.com Store

Jumping for joy after reaching a milestone - 10,000 sent orders via eBay Australia (www.ebay.com.au) - In total around 14,000 orders have been sent out via all channels online. We hit this target back in January 2015, the news just filtered through today.

We sell our first ladies garment of underwear are officially starting to sell them on eBay and our website.

Our first product is sold in our New Zealand market

We register Frank and Beans New Zealand on www.frankandbeans.co.nz We supported Art Dako and their mission to show up fine pieces of underwear in strange ways by the locals, it's pretty cool and brings out the humorous side of " Frank and Beans ". For the event, we donated many vouchers and also some underwear to be handed out to every ticket holder for the event. 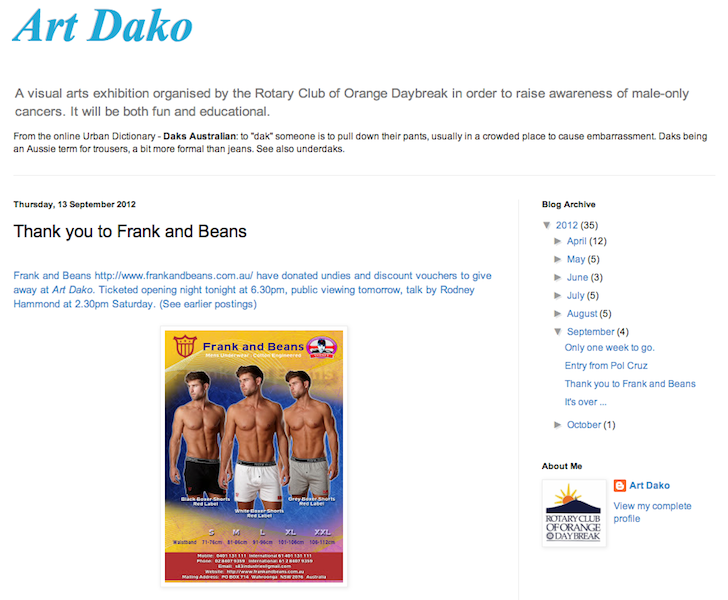 Added to our collection is Mens Satin Boxer Shorts in Navy, Grey and Black

Launched is our line of Mens Briefs in Purple, Navy, Black and Grey

After the success of our Mens multi-coloured packs of Boxer Briefs, we add the same colours in Boxer Shorts

The words Frank and Beans ®™ is Trademarked on Trademark number 1374065

Frank and Beans is launched, in the first week we sold 10 garments on eBay ;-) To date April 2015 we have sold 220,000 garments to customers from Kazakhstan to Tasmania

The name Frank and Beans is born